Saturday’s dispersal sale of the Perdi and Knighton flocks of Bleu du Maine, Charollais, Rouge and Bluefaced Leicester sheep on behalf of the executors of the late Percy and Diana Tait will likely go down in the history books of sheep dispersal sales for some years to come.

The sale, which took place at Worcester Livestock Market with auctioneers McCartneys officiating alongside Harrison and Hetherington, saw a total of 132 lots across four breeds average a phenomenal £1557.

Commenting on the sale McCartneys auctioneer James Amphlett said: “It was an honour to be a part of this historic sale. From start to finish demand from buyers across the UK and Ireland was strong. It was credit to the quality sheep put forward and the hard work put in by shepherds Will Price and Jan Williams and their team.”

Leading the way with a joint top price of 6000gns was a January 2018-born Bleu Du Maine ewe, Perdi Rachelle. By Randalstown Nugget, she is a granddaughter of the flock’s successful ewe Perdi Mona Lisa. Having been shown as a lamb, she won her class at both Shropshire and Staffordshire County Show. She sold, having been served to Perdi Topspec, to Neil Millar, Lockerbie, Dumfries.

Second highest priced Bleu Du Maine at 3600gns was the shearling ewe, Perdi Sophie, another by Nugget and this time out of a homebred Greenside Lynn daughter. Having been scanned with a single to Perdi Topspec, this one found a new home with Haydon House Farm Partnership, Taunton, Somerset. 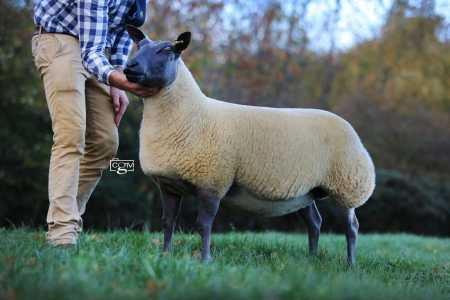