A combination of Covid restrictions and a move of dates from May to September meant that the normal sheep breeds show could not take place at the Royal Ulster Agricultural Society’s Balmoral Show.

Invitations were extended to all Sheep Breed Societies by the NSA to provide examples of the breeds to form a display at Balmoral Show and the  Northern Ireland Bleu du Maine club  were happy to support the NSA and  RUAS in this endeavour.

Even in its very restricted  ‘covid compliant ‘ form  Balmoral Show continued to attract visitors from all parts of the island of Ireland.

Whilst both were in their working ‘clothes’ they were both good examples of the breeds and attracted very positive comments from the numerous visitors to the display during  four days of the show.

A Wexford based sheep farmer commented that he had used Bleu du Maine rams to breed replacement females some 20 years ago, was very pleased with the offspring but thought that the breed was no longer available in Ireland!

He left the stand assured that that was not the case and with a list of breeder contact details.

Another local sheep farmer based in the Silent Valley area of the Mourne Mountains in County Down had purchased a shearling Bleu du Maine Ram from Ballycanal Pedigree Livestock in October 2019.

He stated that the BDM ram had exceeded his expectations, proving to be very hardy and prolific on his Mule cross ewes.

The lambs were vigorous at birth, suckling within minutes of birth  in his outdoor and Polytunnel lambing set up and quick to finish on his grass based system.

His neighbour who had historically purchased another ram breed on an annual basis was so  impressed that he borrowed the BDM ram to cover his own stock! 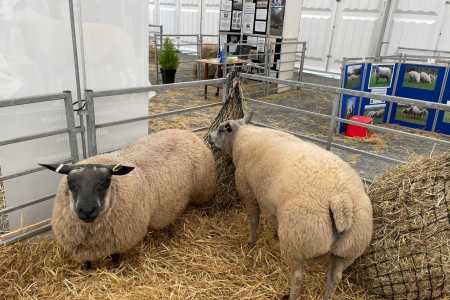